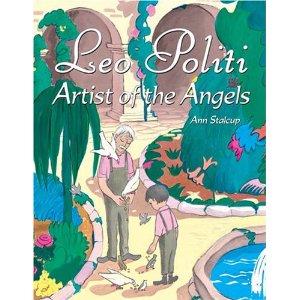 Leo Politi: Artist of the Angels by Ann Stalcup

Hurrah! Confirmed for the 11th Annual Duarte Festival of Authors 2013, happening in October. Should be fun, it's a park event with a children's venue and a very book-loving crowd (or so I've heard from children's author, Ann Stalcup!). And I will put stock in her endorsement.

Here are 2 of Ann's books that I own:

ON THE HOMEFRONT: GROWING UP IN WARTIME ENGLAND

"Ann's story is filled ... with the experiences all English people shared as a nation... This was not life in the ranks fighting the battles, but it was life on the home front - the every day life of a people at war."

LEO POLITI: ARTIST OF THE ANGELS

by Ann Stalcup
Four Wnds Press
!SBN: 978-0-9725516-0-1
"For those who know and love Leo Politi's works, this book is a treasure. For those unfamiliar with his wonderful stories and paintings, this book will introduce them to a man whose love of children, nature, history, and cultural traditions shines through every word and illustration." - - Bonnie O'Brian, Head of Library Services, Retired, Los Angeles Unfied School District

The Leo Politi book is out of print and is a gorgeous hardcover art book with wrap around cover. When I saw it I had to have it, and it's too bad the Amazon listing doesn't have the cover art, so I've taken the one from the Getty Museum site. Do check it out, he was a beautiful illustrator!

Signed copies of "Leo Politi: Artist of the Angels" can be purchased directly from author Ann Stalcup at Four Winds Press. Contact Ann at: ann@annstalcup.com.

The Getty Museum carries LEO POLITI, ARTIST OF THE ANGELS at all three of their museum stores. The book is also available at the Huntington Gardens Gift Shop, the Norton Simon Museum Gift Shop, on Amazon, as well as through your local independent book seller.