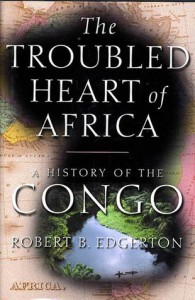 The linear-minded beast in me would really like to finish this book but I've already gotten what I want from it---historical coverage and explanation of what happened to the area known as the Congo from the 1400's to the turn of the century. I stopped short of Leopold II's involvement (or more accurately, the events that ended with Stanley's involvement).

The book itself is well researched with superscripts (yay! Yes, I know, who gets excited by such things?), is well written and succeeds (at least with the eras I was focused on), in giving an overview explaining the Congo's destruction by outsiders, both Arabs and Europeans. Though the manner of its devastation could be seen as complex, the intentions usually were not. There really is such a thing as having too much privilege and superior technology (guns), and wielding such without any understanding of consequences. Thus are a people and a land ravaged thoroughly.

And this all happens before one gets to Leopold.