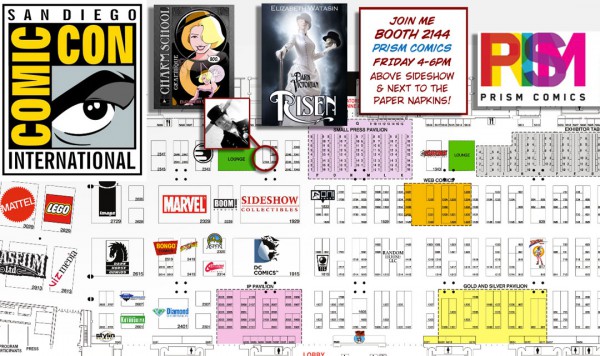 These maps are probably going to break my Booklikes blog format (or, they'll just become itty bitty re-sized graphics). It's not possible to get the entire scope of the convention venue in one graphic because of the length of the building itself.

I'd attended my first SD comic-con in 1990 (in a hotel---with stained carpeting). When it moved into the convention center, it was about half the size it is now because the 'new' half hadn't been built yet. But the con, at the very beginning, had a big energy about it, the kind from the once-a-year convergence of every creative heart and keen IP manager looking to get out of their hovels and offices and Sell, be somewhere, connect, and make things happen. Oh, and add to that readers and fans wanting to buy buy buy and see see see stuff they couldn't acquire or experience anywhere else.

Someone who'd paid attention over the years could probably (more accurately) put SDCC's transformation and growth in perspective, but when the con doubled in size and filled out the entire massive (with new addition) venue, I thought it was because there were even more comic book publishers, toy retailers, the new presence of video gamers, small film studios, and the emergence of small press (essentially, very successful self-publishers).

Growth means change, of course, and SDCC's (formerly SDCI---San Diego ComicCon International), transitions have been fascinatingly organic. All the aforementioned--toy makers, publishers, studios--rose and fell like wee islands in SDCC's ocean planet. Agonizing as it is for we little people to lose opportunities to such natural occurrences, none of it can affect SDCC; it is now far too big. Corporate names like Mattel, Lego, LucasFilm, and Random House have moved in. The nature and needs of the attendees have changed. The event is currently so bloated, one can spend more time trying to survive it rather than enjoy it and for a creator, trying to connect in it.

I was invited to do a panel and will also have booth time with the gracious Prism Comics to tout my Dark Victorian books and Charm School. It's only for the Friday, though it would have been very prudent (if at all possible), to have gotten one night to stay over as it's a 3 hr trek from and to LA. SDCC may be the very biggest media event on the planet, but attending it and especially working it means keeping it manageable and (somehow), fun. ;) IT BEGINS Wednesday night and runs to Sunday, which is why even though I know half the universe is *right this minute* in San Diego to prep, I gotta share my appearance maps now. :)

This thing, this monster. It will continue to change and I will, at least for the Friday, change for it too. :) GOING? I will SEE YOU THERE.