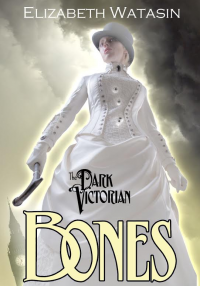 Just finished with Comikaze Expo 2013, now to catch up on a myriad of things, like---

Dropping the price on one of my e-books! My Gothic steampunk mystery avec a very cool gaslamp superheroine, The Dark Victorian: Bones, is now only a dollar more than Sundark: http://www.amazon.com/dp/B00B58ZGFK

Though 2nd in the series, it's written to be self-contained and is (yes), hefty, as is often commented to me at events! ;) That's because more characters, more sub-plots, a more dense immersion into this alternate world of a supernatural, mechanical 1880's London.

In a mechanical and eldritch Victorian London, a black arts surgeon is ripping out the bones and organs of the healthy poor to transplant into the afflicted bodies of the wealthy. Anti-vivisectionists battle with medical doctors, medical doctors condemn supernatural practitioners, and amidst it all the Bone Stealer hunts for his most elusive prize yet: the skeleton of a woman over six feet tall. Secret Commission agents Art, the artificial ghost, and Jim Dastard, the animated skull, rush to stop him before another woman dies. And Art, only six days living after being resurrected to serve the Secret Commission, might be that woman.