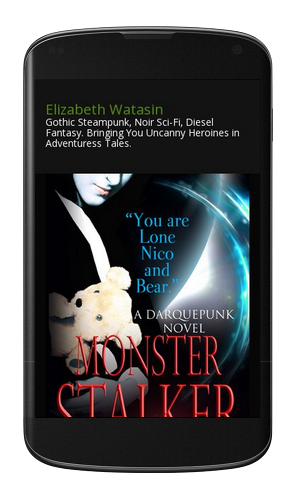 Whoosh! Ran my main site, http://a-girlstudio.com through Google's mobile-friendly test. The site is finally mobile-friendly! Not the prettiest template, but it's responsive, so that's a win. My tackling the redesigns for Charm School and the just launched Darquepunk are next. ^v^

The redesign I had before (during and after the big "my site's hosting is screwed" fiasco), was really striking, but just because I'm impressed by aesthetics doesn't mean it drives well on people's devises. Frankly, it stank on phones. Having to find a Wordpress template that works well for authors/creative people is hard; what I chose is probably not the best solution. I am *not* a web designer, I cannot code (except for wee html knowledge), so the site lacks those kinds of design final touches. Other than that, it's like MAGIC seeing it rearrange itself seamlessly for tiny screens and 'big' laptop ones. :D

More to Do. I've not been promoting Monster Stalker: A Darquepunk Novel like I should, because now I'm engrossed in writing BLOODY NIKE, the second book.

Will get to Everything, soon.