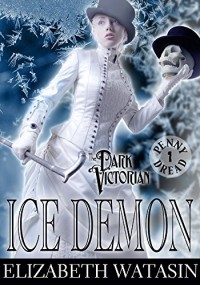 AS free as the wind blows! Gittit, NAO!

I've been so busy, and 3 weeks is the longest I've been away from Booklikes. :( I bet you've all grown up, had children, gotten married (in that order), and had a few Life Changing Events since I've been away. Plus, read lots of books! That's the important thing! :D

Law'! I am trying to do this free book promo thing and everyone wants *10* beautiful reviews for me to qualify (for promotion). I just need one more. So this is an open plea that if anyone would like review ICE DEMON over at Amazon (I just need one more), that would be very cool. And I hope you enjoy.

POISON GARDEN: An Elle Black Penny Dread Vol 2 is with the editor. I still have to make the finals of the new covers (with the original digital artist of Sundark 'retiring', I ought to make the covers more like a series). The book has been a real experience---'twill be as sensual as MEDUSA but in a different way, because plants and conservatories have their own kind of sensuality. PLUS: Entheogens. YEAH, BABY. I really do a number on poor Elle. The synopsis:

Psychic detective Elle Black and her wife Faedra escape London’s unrest for Peaseflower’s fabled gardens and to aid a wealthy friend, troubled by things she cannot name. But once there, Peasy Bunkley assures them nothing is amiss, with herself or her perfect, eerie staff. In the marvellous glass conservatories with its exotic, deadly specimens, Elle knows something is very wrong. Even her telekinetic abilities can’t prevent danger to her wife and Elle succumbing to an insidious attack, rendering her hallucinatory and mad. What her assailants don’t know is that insanity won’t prevent Elle from returning to get Faedra back.

Like I said, this has been a real pleasure to write, though the research was INTENSE. I'm not a scientist, and I mostly kill plants out of ignorance rather than successfully nurture them. :-p So I had to get into that world, of botany, propagation, conservation, ecosystems, of exotic plants, flowers, fruits, of poisonous plants, hallucinogens, the effects of hallucinogenic experience, the effects of poisoning, plant mimicry, plant awareness (consciousness---if one wants to stretch that), and so on. Plus, vegetarian attitudes, Victorian style. And then do horrible things to Elle.

NEW THINGS: Whilst *not* going to Wondercon 2015, I suddenly figured out something I've had on the back burner for uh, (math)---since 1998, I bet. IT will be Gothic Sci-Fi, and I am very pleased with it and decided to work on it asap just to pour my brains out. So it's about 21K words on 'NEW THING' (to be announced), at least for one book, because I'm working on 3 books of the NEW THING at the same time. 6 covers have been mocked up by me as I visualise this beautiful thing. And 6 book synopses have been written. And Elizabeth has to actually write those books and hurry up and make final covers. I could fire that woman, she's so freekin' lazy. ;) We wanted it YESTERDAY, Elizabeth, because this is going to be COOL! More later!!