Annie on my Mind (reblog) 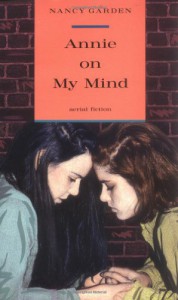 Wish I'd known of this book when growing up, but hey, never too late. :)

"If you don't put that ring on this minute, I'm going to take it back," Annie whispered in my ear. She leaned back, looking at me, her hands still on my shoulders, her eyes shining softly at me and snow falling, melting, on her nose. "Buon Natale," she whispered, "amore mio."

"Merry Christmas, my love," I answered.

From the moment Liza Winthrop meets Annie Kenyon at the Metropolitan Museum of Art, she knows there is something special between them. But Liza never knew falling in love could be so wonderful... or so confusing. (source)

I've heard of this book before, but had never read it until now - this is yet another one of my assignments for my Resources for Young Adults course. This is another book that's considered to be a classic; it's one of the first LGBT young adult novels. Although this was written thirty years ago, I think it's especially relevant today.

I haven't read very many LGBT books. I read Aristotle and Dante Discover the Secrets of the Universe, which I disliked, and Beautiful Music for Ugly Children, which I liked very much. Thankfully, I felt similarly about Annie on my Mind - not only was this book groundbreaking, it's also a legitimately good book. I really enjoyed reading it; Annie and Liza were likeable and believable characters and I was anxious to read their story.

More importantly, the story itself was believable. One of my biggest annoyances with Aristotle and Dante was that their story felt too good to be true. While Liza says "I love you" incredibly early on in her relationship with Annie, Garden demonstrated that their relationship was far from perfect - and their problems weren't solely based on the issues stemming from the "abnormal" nature of their love. Garden shows very well that Liza and Annie face all the challenges that straight couples do: communication mishaps, sexual tension/temptation, rules imposed by parents... but they also have to struggle with the fact that their very relationship is forbidden simply because they're both girls. It was inspiring to see Liza and Annie overcome these challenges

I think this book is especially important to read today. As society is much more aware, there are a lot of teens who can relate to the issues that are discussed in this book. LGBT couples will obviously relate to it, but I think that straight teens who may not have encountered much diversity may be surprised at how few differences there actually are between themselves and LGBT couples. I also think that this book is historically significant, because, while there still is along way to go until full equality is achieved, LGBT rights have come a LONG way since 1982. What was especially interesting to me was that this story took place in New York City. I've always had the impression that NYC was a very open and accepting place, even back in the 1980s - my mom had an uncle who was gay (he actually died of AIDS in the late 80s) and he lived there, and, to my knowledge, was pretty open about his personal life with everyone except for his family. The fact that Annie and Liza face so much animosity in a place like New York was honestly kind of shocking to me, and I think the progress that has been made since them should perhaps be acknowledged more than what I have seen.

I really liked this book, and it's definitely one that I think should be included on YA library shelves. I think that this book would resonate with many teens, both gay and straight, and that it tells an important story that more people should read. I definitely recommend giving Annie on my Mind a try!